This video features some scenes and is another reason why Jets fans are having their toughest season to date. It was filmed for about five hours and the creator Jay Nog was able to capture some quality audio and video of most of the harassments.

Mar 31, 2015
0
For the KIRS Top 100 NFL Players of 2014, Stan and Rob both put together their own individual lists and then averaged the rankings together to make a combined Top 100. The graphic showing the list will have their ranking obviously, but also where Stan and Rob ranked them on their individual lists, in case you were curious. Many disagreements will be had over those choices. 10 - 1 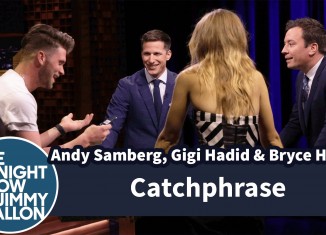 May 22, 2016
0
Jimmy Fallon and Washington Nationals right fielder Bryce Harper team up against Andy Samberg and model Gigi Hadid for a game of Catchphrase.