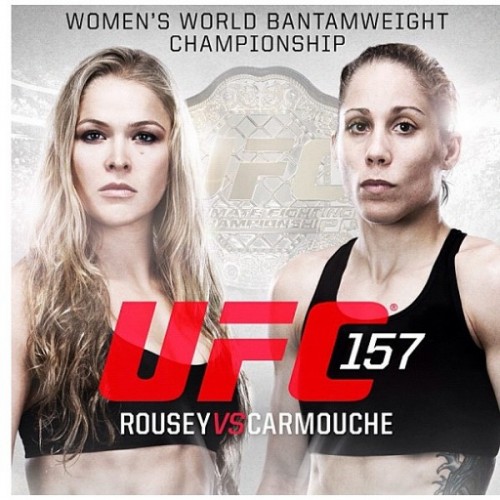 This past weekend, the Honda Center (in Anaheim, CA) was the site for a great moment in sports history. UFC 157 featured the first ever women’s fight in the UFC. It was also the first main event (and title fight) to feature female fighters: “Rowdy” Ronda Rousey and Liz Carmouche. One more thing, this fight also featured the first openly gay (male or female) fighter in Carmouche.

A few years ago, this fight wouldn’t have happened. UFC President Dana White hasn’t been a strong advocate for women’s MMA. On numerous occasions, he has shared his belief that the talent pool of quality female fighters isn’t very deep. I thought that belief was slightly off because Strikeforce (the UFC’s sister organization) had been showcasing female fights with a respectable fan following (Ronda Rousey being a big part of that).

Ronda Rousey’s star power helped change Dana’s mind. Rousey is outspoken, beautiful, and a serious MMA fighter. As the UFC began to add Strikeforce fighters into its talent pool, it was only a matter time until Rousey made her debut in the octagon.

With Rousey leaving Strikeforce as the reigning women’s bantamweight champion (135 lbs), she was rewarded by being crowned the first ever UFC Women’s Bantamweight Champ.  The significance of this fight led to a huge media blitz pre fight.

On fight night, the ladies didn’t disappoint. I tip my hat to Liz Carmouche. Carmouche probably had the best shot anyone has ever had of beating Rousey so far. Early in fight, Carmouche managed to take Rousey’s back and attempted to submit Rousey via a neck crank. It seemed like things were going Liz’s way, but Rousey was able wiggle her way out of the hold.

After Rousey’s great escape, Rousey was on the offensive. Rousey tied up Carmouche, and brought Carmouche down with her flawless judo skills. Anyone who has seen a Rousey fight knows that when Rousey takes a fight to the ground it doesn’t last much longer. The end is close at hand. Carmouche fought valiantly to stop what was coming, but Rousey was too relentless. “The Armbar Assassin” ended the fight at 4:39 in round 1 (her longest bout yet) with her signature submission: the armbar.

With the win, Rousey (7-0) remains undefeated and still hasn’t gone past round 1 in any of her fights. Rousey is very quickly becoming the face of Women’s MMA. How long that will last? Only time will tell.

Other Notable Fights from UFC 157:

Urijah Faber defeats Ivan Menjivar via submission (rear naked choke) at 04:34 of Round 1.

Robbie Lawler defeats Josh Koscheck via TKO at 03:57 of Round 1.