Things are really starting to heat up as we come closer and closer to the draft. Teams are trying to put themselves in a better position to win and it seems as if wide receivers are a hot commodity. In the last mock, we saw a perennial Pro Bowl quarterback get traded to a rival. This time around we’ll see how the draft is shaken up after a pair of young wideouts and a top 10 draft pick from 2007 switch teams.

1. St. Louis Rams – Sam Bradford, QB, Oklahoma – Bradford is the consensus number one overall pick even though the Rams haven’t signed him before the draft. The Cleveland Browns might try to trade up to take Bradford so thats one thing to keep an eye out for.

2. Detroit Lions – Ndamukung Suh, DT, Nebraska – The Lions traded for Rob Sims so that Jeff Backus could stay at left tackle. That pretty much fills their need along the offensive line. Suh is too good of a prospect to pass up on.

3. Tampa Bay Buccaneers – Gerald McCoy, DT, Oklahoma – All along the general consensus was that the Bucs were looking at either Suh or McCoy but would likely take McCoy because he’s a better fit for the 3-4 scheme. McCoy has to be the clear choice here.

4. Washington Redskins – Russell Okung, OT, Oklahoma St – The Skins need to replace Chris Samuels, and this is a little too high to take a wide receiver.

5. Kansas City Chiefs – Brian Bulaga, OT, Iowa – These guys should move Brandon Albert around along the offensive line and add Bulaga because they were horrendous last year against opposing pass rushers.

6. Seattle Seahawks – Trent Williams, OT, Oklahoma – The trend here is offensive line and these guys are no exception. Their other positions of need are at running back and defensive end, but with another first round pick, they can address those needs later.

7. Cleveland Browns – Eric Berry, S, Tennessee – For a little while there, there was a little indication they were thinking Clausen here but I think they’re satisfied with Derek Andersen as the starter.

8. Oakland Raiders – Anthony Davis, OT, Rutgers – If he can drop a few pounds and keep his head on straight, this will be a solid pick… something the Raiders do very rarely.

9. Buffalo Bills – Jimmy Clausen, QB, Notre Dame – They need a quarterback. Anything else would just be stupid.

10. Jacksonville Jaguars – Derrick Morgan, DE, Georgia Tech – I still think that Morgan is a good fit here. He’s strong, he’s fast and he seems to never give up on a play.

12. Miami Dolphins – Sergio Kindle, OLB, Texas – Bill Parcells has had experience turning headcase receivers into stars and he’ll do the same with Marshall. That team is going to be scary if Chad Henne plays well. That said, I feel like they gave up too much for him. At the end of the day, they run the ball pretty often.

13. San Francisco 49ers – Joe Haden, CB, Florida – This defense is going to be one of the best in the league next season. Mark my words.

14. Seattle Seahawks – CJ Spiller, RB, Clemson – Like I mentioned before they could also fill another need by drafting a defensive end here, but I think they’ll take a chance with this playmaker and help the defensive line later in the draft.

15. New York Giants – Rolando McClain, LB, Alabama – This pick makes too much sense here not to happen. Personally, if it were at all possible, I’d consider trading up a few spots to take him.

16. Tennessee Titans – Jason Pierre-Paul, OLB, South Florida – This kid is versatile in that he can play both outside linebacker and line up at defensive end. That should make him more attractive.

17. San Francisco 49ers – Mike Iupati, OG, Idaho – He’s an upgrade over anyone they already have and will instantly help their power running game.

18. Pittsburgh Steelers – Earl Thomas, S, Texas – Who knows whats on the Steelers minds these days? I don’t think they’d go for a wide receiver to replace Santonio Holmes this early and they have more pressing matters in the secondary.

19. Atlanta Falcons – Brandon Graham, DE, Michigan – In my last mock, I had them taking Pierre-Paul but I think they’re leaning toward a more traditional defensive end despite Graham’s size. His production on the field should silence any qualms they have.

21. Cincinnati Bengals – Demaryius Thomas, WR, Georgia Tech – If Dez Bryant slips past the Broncos, the Bengals would be stupid not to try and grab him. If not, Thomas has great value here.

22. New England Patriots – Dan Williams, DT, Tennessee – I like Gresham, but the Pats aren’t known for making the sexy pick. Plus that defense needs some revamping after they lost Richard Seymour.

23. Green Bay Packers – Charles Brown, OT, USC – With the way the Packers offensive line was manhandled in the postseason last season, one has to believe they’ll address their needs in that area.

24. Philadelphia Eagles – Kyle Wilson, CB, Boise St – They could also look to upgrade their offensive line after the ACL injury to Jamaal Jackson.

25. Baltimore Ravens – Jared Odrick, DT, Penn St – Ozzie Newsome is notorious for taking the best player available and this time it just happens to be someone that fills a need.

26. Arizona Cardinals – Taylor Mays, S, USC – The Cards lost Antrel Rolle to free agency and Mays’ coverage skills are a bit questionable but he should be a solid pick here.

27. Dallas Cowboys – Nate Allen, S, South Florida – Allen is clearly the best safety left in the draft and the Cowboys may address the spot left open by Ken Hamlin’s departure.

28. San Diego Chargers – Jahvid Best, RB, California – Best is a bit similar to Darren Sproles but he’s the best back available at this point and they need depth at the position. They could go another direction with this pick and take a look at a guy like Toby Gerhart in the later rounds.

29. New York Jets – Everson Griffen, DE, USC – The Jets got Santonio Holmes for pretty much nothing and can now address their needs elsewhere.

30. Minnesota Vikings – Devin McCourty, CB, Rutgers – Some mocks have Patick Robinson as the pick here but I think Robinson’s character issues push him into the second round. McCourty has excellent skills and could contribute right away. 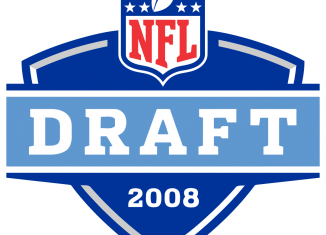 Apr 21, 2008
0
Since I wrote the last mock draft, there's been a lot of rumbling about who's stock has risen and fallen. And after going over...

Mar 9, 2008
0
Today’s professional athlete is often looked at as celebrity by many and for their exploits on the fields or courts immortal. The scratches...