Matt Kenseth won at wild one at Pocono.With 3 laps to go, race leader Joey Logano, then Kyle Busch — who was attempting to win his fourth win in a row — ran out of fuel. This was Kenseth’s second Sprint Cup win this year.

Busch barely crossed the finish line and failed to get into the top 30 in points. He is currently 32nd. He had won three straight Cup races and four of five coming into Pocono. He swept the Xfinity and Cup races at Indianapolis and won the Camping World Truck Series race this past Saturday at Pocono.

The top-five ended up being Brad Keselowski, Jeff Gordon, Dale Earnhardt Jr. and Greg Biffle. This was Biffle’s second top-five of the season. As for Earnhardt, he has a fast car all race when he was in open air, but he got a speeding penalty during a green-flag pit stop in the first half of the race, then spun out after contact with Cole Whitt just before the halfway point. Last years defending race winner goes win-less at Pocono one year after sweeping both Pocono races.

Kenseth breaks the streak of Kyle Busch who was looking to become the first driver since Jimmie Johnson in 2007 to win four straight. 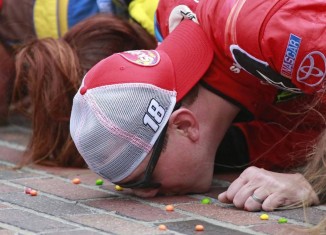 Kyle Busch Tasted The Rainbow And Kissed The Bricks

Jul 30, 2015
0
Kyle Busch has 4 wins this season and still finds himself on the outside of the Chase looking in. He has won 4 of the last 5 races starting at Sonoma. He then started his streak of three-in-a-row two weeks later at Kentucky, New Hampshire and as of Sunday, Indianapolis. 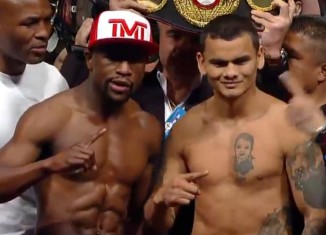 Sep 13, 2014
0
Join hosts Ed, Stan, Danny, Lincoln and Shayna from Noon to 1pm for unique and entertaining sports coverage you can't find anywhere else! The team will be breaking down the upcoming week 1 NFL match ups & Team USA Basketball in the FIBA tournament... HELLO BROOKLYN!