The Olympics are over as the WNBA’s best return to the regular season grind just in time for the playoff push. The second half of the year should provide plenty of moments that will have you cheering, crying and maybe just maybe appreciating basketball at it’s purist form…

The Gold medal squad from team USA would have easily been all stars if the game was played this season. For many casual Olympic fans it may have been the first time witnessing these great players in action possibly catapulting a desire for more action. Team USA’s dominance during the Olympic games has been such a catalyst to drawing fans and growing the popularity of the league especially considering that’s how the league got started.

The 1996 Gold medal squad that featured names such as Lisa Leslie, Sheryl Swoopes and Dawn Staley used the popularity of the team to get the league going a year later. I’m not saying it will have the same effect today but there is no denying the fact that millions of people tune in every four years for the Olympic games. That is probably the best promotion the league gets for today’s star players like Diana Taurasi and Brittney Griner too bad its only every four years.

The 2016 ESPY’s was filled with plenty of emotional speeches and stories at the podium last month but lost in the moment was Breanna Stewart’s call for more exposure to the WNBA. The rookie Seattle Storm forward said:

“During my time in college I received an enormous amount of media attention,” Stewart said. “I’m grateful for that. And now that I’m in the WNBA, playing with other amazing female athletes, I’m trying to understand why we, as professional female athletes, don’t receive anywhere near the fame. This has to change.”

“Equality for all takes each of us making an effort. Thank you for this honor and together let’s be better.”

Her message was clear and put the media on notice regarding the league’s visibility and has done her part but putting together an amazing rookie year. Stewart ranks fifth in the league in scoring (19.2 ppg), second in rebounding (9.3) and third in blocks (2.1). She is not only the run away rookie of the year choice but a candidate for league MVP.

The race for league MVP is a close one featuring an array of talented players with teams in playoff contention.

Leading candidate Nneka Ogwumike has been dominant all season for the WNBA’s top team the Los Angeles Sparks with a stat line of 19.6 points, 71% FG, 9.2 rebounds, 2.8 assists, 1.3 blocks, 1.1 steals

The New York Liberty’s Tina Charles has been leading the league in scoring while keeping the club fighting atop the Eastern Conference. 21.4 points, 9.6 rebounds, 3.7 assists, 1.0 steals

Maya Moore a former league MVP is having another banner year as she tries to push the Minnesota Lynx for back to back championships battling the Sparks in the west. 19.4 points, 5.2 rebounds, 4.4 assists, 1.6 steals

The Minnesota Lynx are the defending WNBA champions but are facing their biggest test battling the talented Los Angeles Sparks. The Lynx and Sparks have split their first two match ups this season each winning on the others home court. The third and final battle of the season will take place on September 6th in Los Angeles with the regular season conference title possibly on the line. The Sparks (21–3) have a 1/2 game lead over the Lynx (21–4) to start the second half of the year.

In the 20 seasons of the WNBA there have been many amazing players who have left their mark on the leagues history. Some of the legends walking away after this season include Tamika Catchings of the Indiana Fever and Swin Cash of the New York Liberty each currently going through farewell tours. In her fifteen year career Catchings has won four Olympic gold medals, named the WNBA’s Most Valuable Player, a nine-time All-Star, and a five-time winner of the league’s Defensive Player of the Year award. Cash won two Olympic gold medals, two-time All-Star MVP, three-time WNBA champion and serving as a color commentator for the WNBA & NBA. 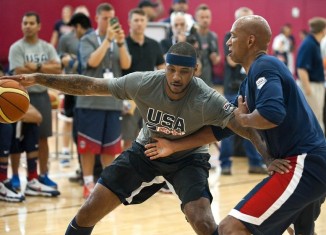 Jul 23, 2016
0
An all-access look at how Carmelo Anthony is spreading his veteran wisdom in USA Basketball practice as he prepares to take part in his 4th Olympic Games .