The 2016 NBA Draft did not disappoint in regards to huge trades and plenty of teams making decisions to affect their future for better or worse. The first two selections of Ben Simmons and Brandon Ingram left little mystery to begin the night but the Boston Celtics made sure the NBA world could be confused immediately with the stunning selection of Jaylen Brown from California. The rest of the night followed with teams picking for other teams, poor draft entry decisions from three freshmen, continued stashing of international players and of course the blockbuster deal that sent Serge Ibaka from Oklahoma City to Orlando for Victor Oladipo.

It’s rare to say the Minnesota Timberwolves are winners especially with their regular season records the past few years earning them consecutive lottery picks. The addition of Providence stand out Kris Dunn has solidified the back court future of the team already loaded with exceptional young talent that includes back to back Rookie of the year winners Andrew Wiggins and Karl Anthony Towns. Dunn will likely be the starting point guard by mid season as I believe the team will part ways with Ricky Rubio before the trade deadline to acquire more veteran talent to help in the front court. Don’t be surprised if the Wolves are fighting for a playoff spot in April of next year and send Kevin Garnett off the right way.

I find it hard to believe Jaylen Brown was worth a number 3 pick in the draft considering he was rated as a top 10 player on many draft boards. I’m not going to harp too much on the pick but definitely will on the selections moving forward especially since the team had an NBA record 8 picks going in to the night. It was amazing to see the Celtics unable to flip some of the picks into a trade for a veteran that they desperately need instead deciding to draft international players and stash to avoid picking up the contract next season. Danny Ainge has pulled off many miracles in the past but this time around it looks like he may have actually dropped the ball for Boston.

Apr 18, 2015
0
Join the KIRS Radio team from Noon to 2pm for unique and entertaining sports coverage you can't find anywhere else! The team will be discussing the start of the NBA playoffs and talk Mayweather VS Pacquiao with creator/writer of ShillFreeSports.com Sam Dusenbury 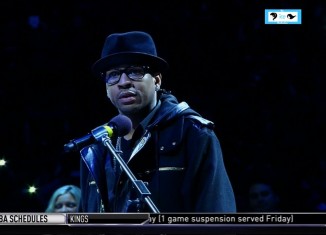 Mar 2, 2014
0
Allen Iverson salutes the Philadelphia crowd as the 76ers retired his No. 3 jersey on Saturday night. High above the Wells Fargo Center court, Iverson's banner fit between Maurice Cheeks' No. 10 and Charles Barkley's No. 34.