For the KIRS Top 100 NFL Players of 2014, Stan and Rob both put together their own individual lists and then averaged the rankings together to make a combined Top 100. The graphic showing the list will have their ranking obviously, but also where Stan and Rob ranked them on their individual lists, in case you were curious. Many disagreements will be had over those choices.

Players who were not ranked on one of the lists counted the same as being ranked 100. For exact ties, the first tiebreaker was who was ranked the highest on either list. The second tiebreaker was just alternating between Stan and Rob’s highest choice down the list. Steve Smith Sr.. is the only player to appear on both lists and not make the final cut, missing by half a point. Please don’t fight Stan and Rob. It’s not their fault. It’s math’s fault.

Stan: So the first thing that comes to mind and will continue to come to mind are the guys that we either left off the list or ranked too low/high. Right off the bat I notice I left off a bunch of dudes like Kelechi Osemele, Duane Brown, Patrick Peterson and Zack Martin. It’s not that I don’t like them, they just slipped my mind. I’m kicking myself.

Maybe I have a bias against offensive lineman and defensive backs. I don’t think I hate defensive backs because I used to be one but how do you quantify what an offensive lineman does? We all know that Dallas has the best offensive line in football and two of the best of that group are Smith and Martin. What about Doug Free? There are no stats to say “well this guy is clearly better than this guy” and they’re on the same team! I guess that’s why I have David DeCastro and Maurkice Pouncey on this list because I saw how good a season LeVeon Bell had and they’re a big reason for it. Like Rob said, there’s going to be a lot of “my bads” throughout this list.

Rob: First off, I want to pour one out for the guys I think got left off this list. That starts with Steve Smith Sr., who is both marvelous and scary. Adam Jones was the best returner in the league this year and a serviceable slot corner, and he will always be Pacman to me.

Rolando McClain was wonderful, and a legitimate Comeback Player of the Year candidate. Travis Kelce had a breakout season at tight end. Ziggy Ansah had his own breakout season, and Stan you left him off your list even though you argued Ndamukong Suh wasn’t a Defensive Player of the Year candidate because he played with guys like Ansah on the defensive line.
Chris Harris was a spectacular if not overshadowed corner, and Carson Palmer deserves some recognition based on how the offense wilted without him.
Now, as for linemen stats, we do have a way to measure them. They are the Pro Football Focus grades. where Brown and Jared Veldheer ranked as the 8th and 9th best offensive tackles in the league while anchoring sub-par offensive lines. Osemele and Martin were tied for the fifth best guard in the league, both playing for dominating offensive lines.
The stats aren’t the end of the conversation, but they help tell the story, even for offensive linemen.

Stan: I was surprised you left Steve Smith Sr. off your list because we both reference him so much. Pacman I left off because he slipped my mind. Same goes for McClain, Ansah and Kelce.

I purposely left off Carson Palmer because he missed a lot of games due to injury. He was a huge part of the Cardinals success but that’d be like giving Peyton Manning the MVP the year he had neck surgery and the Colts were garbage without him. Although I wasn’t totally against that.
How about some guys we both had in this group? The only three being Nick Mangold, Mike Evans and Chris Borland. Mangold almost didn’t make my cut and I’m mad at myself in retrospect for having him as the lone Jet when I clearly forgot about Sheldon Richardson and Mo Wilkerson. Maybe it’s because I don’t think they’ll stay with the Jets. Evans and Borland were both fantastic, especially for being so young.

Rob: Whoa whoa whoa whoa whoa whoa whoa whoa whoa! I DID NOT LEAVE STEVE SMITH OFF MY LIST! I need that to be clear. I don’t need a visit from Suckerpunch Steve coming after me with a shotgun whistling “Farmer in the Dell“. No thank you. I had him on my list, but we both had him too low his combined average was 88. Julius Peppers who I left off my list got on with 87.5.

I understand you are biased against the Jets and the Jets don’t deserve any favors, but they were far from your worst omissions.
For our other agreements, Evans and Borland were both rookie of the year candidates on their side of the ball. I know we are going to see ODB higher on this list, and deservedly so after the season he had, but Evans was my favorite receiver before the draft and he’s my favorite now. He bullied smaller corners and made a mockery out of jump ball situations. Borland was equally devastating, stepping in for an injured NaVorro Bowman and Patrick Willis, both of whom would have been locks for the top 30 on this list. The guy just beat up people.
Of all the guys I left off my list, Forte might have been the one I tried hardest to find a spot for. Trestman severely underused his running game (remember the 7 carry loss to Detroit?), and Forte still finished third in the league in percentage of team offense behind Murray and Bell, both of whom were Offensive Player of the Year candidates.

Stan: I just need to say that I love the Omar reference and if anyone reading this hasn’t watched The Wire (Dogs) stop what you’re doing and go watch it.

I knew if I left off Old Man Smiff he’d find out about it and find me Liam Neeson style.
I think Forte was the guy I was thinking of when I said I was surprised you left them off.

Rob: His numbers running the ball were just so underwhelming it was hard to justify putting him ahead of guys like Lamar Miller, Jeremy Hill, and Arian Foster.

Stan: It hurt me much to leave off Lamar Miller. I’m assuming I left him off, I can’t remember. Anyway, I love Miller just like I love all former Hurricanes. Yes, even Jacory Harris. Except I look at Jacory like a disappointed father would.

The good news about Trestman in Baltimore is that they don’t have a star running back for him to ruin. Justin Forsett is good but he’s no star. Come to think of it, what’s Trestman gonna do in Baltimore? Torrey Smith is a free agent, and our boy Superman Smiff is getting up there in age.

Rob: Trestman is a disaster waiting to happen.

So you’ve got to explain Cam Newton and Devin Hester on this list. You included way more quarterbacks than I did, but Cam didn’t even sniff for me. Also, Hester had 38 catches for 500 yards and two scores? Why is he there?
Stan: …
Rob: I will take that long pause as a realization of your terrible mistake. By the way, not to rub it in about you snubbing your boy from the U Lamar Miller, but he had 1,099 yards and eight touchdowns on 216 carries. In case you aren’t a math guy, that is 5.1 yards per carry, second among running backs behind Justin Forsett.
Stan: I starting responding and got distracted…for about 42 hours. Anyway, I put Cam on the list because despite his mediocre numbers because he put the Panthers on his back and took them to the playoffs. Is the playoff seeding system broken? Most definitely. But he took them there and lost to the best team in the NFC. Devin Hester led the league in kick return yardage and was top five in all purpose yardage. Also he went to the U. I think that sort of makes up for it right?
Rob: I can see the argument for Cam, except he led a 7 win team and Derek Anderson was the quarterback for two of those wins.
Stan: I’m willing to admit that I’d put Derek Anderson on this list if he was responsible for the other five wins. Although I see what you’re getting at with Cam. I also had Colin Kaepernick and Joe Flacco on my list and thinking back I probably could have left them off for some of the guys I forgot about. I’m sure I’ll be hearing about it.

Rob: No I get it. Quarterbacks make the game go round. I had Alex Smith, Eli Manning, Matt Ryan, Joe Flacco, and Ryan Tannehill all on the very border of my list. Just came to a point where I said do I put all five in the last 20 spots or none of them. It was too tough to put only some. If Cam played those two Bucs games he would have been in that group too. It is tough making those final cuts. 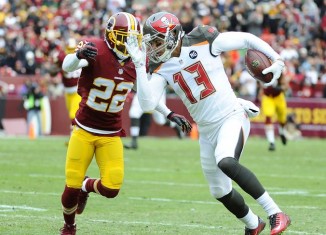 Nov 27, 2014
0
Rob made some great points last week. And I think I would suffer through another terrible season if it meant the Giants would get hot and win a Super Bowl. Here’s the problem though. I don’t want Jerry Reese running this team anymore. He doesn’t draft well and does nothing with draft picks in the later rounds. So from that aspect, I wouldn’t want them to win a Super Bowl because we’d be stuck with another few years of Jerry Reese. 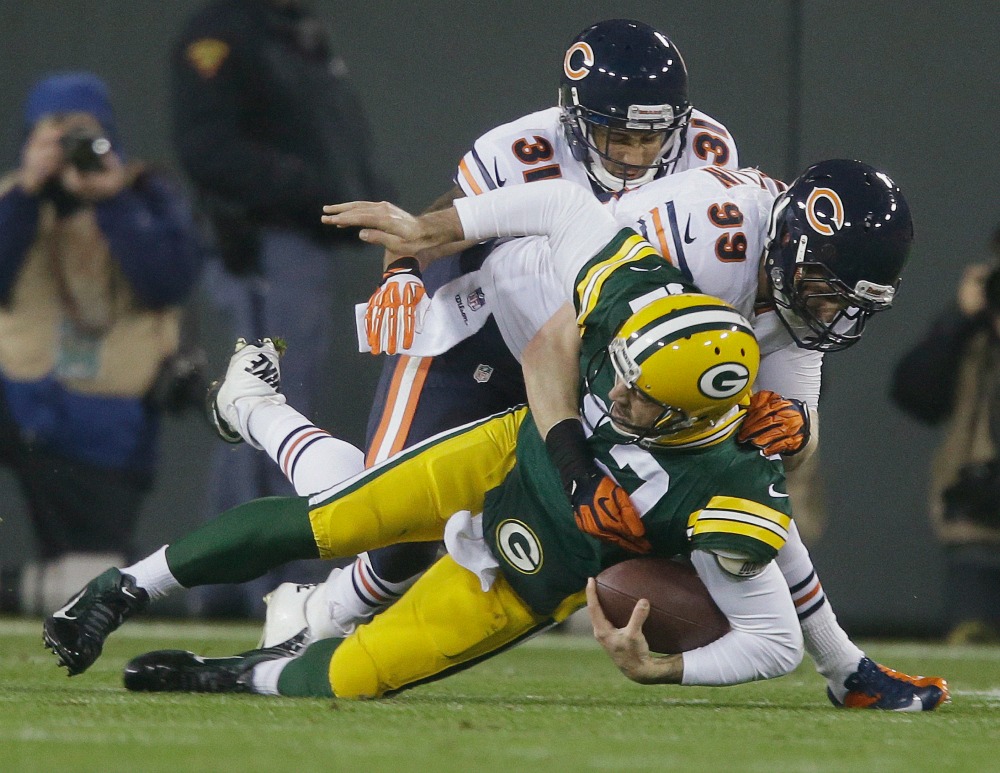 Nov 6, 2013
0
We’ve past the halfway mark of the regular season and we’re starting to get a good idea of who the bad teams are and who the good teams are. Enough banter, on to the rankings.