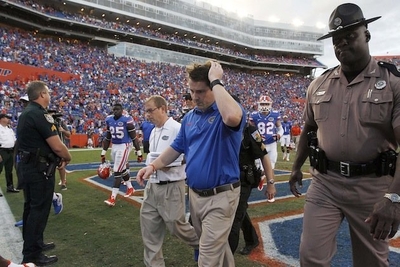 1. The Florida Gators are still waiting for Urban Meyer to come back. For the first time ever, UF lost to an FCS school when they lost to Georgia Southern…at home. Whats even more surprising is that they did it without completing a single pass.They ran for 429 yard yards though. Florida is now 4-7 and will probably end the season without a bowl game. Tim Tebow isn’t walking into that locker room any time soon so the Gators better find another way to turn it around.
2. What exactly counts as targeting? I don’t think the refs know. They’re just out there throwing flags and ejecting players. In today’s game between Miami and Virginia, I saw two different guys flagged and ejected for targeting on questionable calls. Virginia’s Tim Harris left his feet to hit Stephen Morris as he was sliding so I could see how the call could be made because he dove, but when Miami’s Rayshawn Jenkins had a solid tackle, he was also called for targeting. Jenkins’ ejection was rescinded though. There needs to be a clear cut call on whats targeting and what isn’t.
3. Some of these schools need to stop scheduling cupcakes. When you have two different teams scoring 80 points, I think its time for teams to schedule some tougher opponents. This week, Nick Saban and Jimbo Fisher called their opponents “good football teams” in their press conferences. What a joke. Alabama hung 49 points on Chattanooga and FSU dropped 80 on Idaho. Good teams huh?
4. Top teams drop, making things interesting in the BCS. Baylor, Oregon, Texas A&M and UCLA all lost, making things interesting. Going forward, we might see some of the lesser popular schools like UCF, Fresno St and Northern Illinois make a bid for a BCS bowl.
5. With Money Manziel losing and looking so pedestrian, the Heisman race is wide open. While I still think he’s got the inside track to win the award, other guys have closed the gap and we could see a real race as we get closer to awards season. Manziel only completed 16 of his 41 passes for a touchdown and two interceptions.

Oct 17, 2014
0
Join hosts Ed, Stan, Danny, Lincoln and Shayna from Noon to 1pm for unique and entertaining sports coverage you can't find anywhere else! The team will be breaking down the Percy Harvin trade along with Rapper Drake's appearance at Kentucky's Midnight Madness... 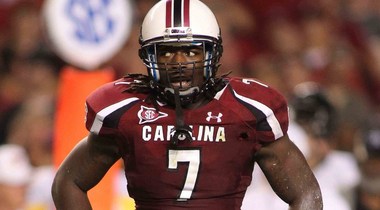 Sep 8, 2013
0
Here are Stan Talouis' thoughts after an exciting week 2 of College Football... 1. Jadeveon Clowney and South Carolina might be overrated. With all the hype surrounding...