Before I get into the rankings, I want to point out that I made a few mistakes in last week’s rankings. If you didn’t notice, then I guess I have nothing to apologize for. Anyway, I’ll do better this week. On to the rankings.

32. Jacksonville Jaguars (0-5) (32) – Hey look, they scored 20 points and got a huge game from Justin Blackmon. Maybe he’s exactly what they needed and they won’t finish 0-16. Or maybe they will. Blaine Gabbert/Chad Henne is still the starting quarterback. Next game: @ Denver Broncos (The spread is 28 points…thats hilarious.)

29. New York Giants (0-5) (28) – The Giants aren’t done losing by a long shot and I don’t care how bad the division is, they’re not getting into the playoffs. The offensive line is just that- offensive. The defense is horrendous and there is no good part of this team. On the bright side, Jadeveon Clowney is gonna look awesome in blue. Next game: @ Chicago Bears (TNF)

28. Atlanta Falcons (1-4) (25) – I’m really disappointed in the Falcons. With their schedule, they might have to win 10 or 11 straight games against some really good teams to make the playoffs. There are some questions about how Mike Smith handled this game but they have to put it behind them and move on. Next game: Bye Week

27. Carolina Panthers (1-3) (24) – The Panthers had no answer for the Cardinals defense. Cam Newton was sacked 7 times and threw three interceptions. The running game never really got going and the receivers dropped a number of passes. Next game: @ Minnesota Vikings

26. Philadelphia Eagles (2-3) (27) – I hate to say it this way but the Eagles should have won this game, even without Michael Vick for most of the game, because they played a terrible Giants team. What is there to break down? They’re not very good but the Giants aren’t far behind. Next game: @ Tampa Bay Buccaneers

25. St Louis Rams (2-3) (26.) – Sam Bradford threw for 222 yards and three touchdowns…because it was the Jaguars. Just imagine what Peyton Manning is going to do. Next game: @ Houston Texans

24. Oakland Raiders (2-3) (29) – Its official. Terrell Pryor is the savior of the Oakland Raiders. The man’s luck just seems to be limitless and always manages to turn a bad play into a good one. Kudos to future Hall Of Famer Charles Woodson for tying the NFL record for defensive touchdowns in a career. Its a shame that this game was on so late because it was actually very entertaining. Next game: @ Kansas City Chiefs

23. Buffalo Bills (2-3) (17) – The Bills lost twice on Thursday night. The first loss was the injury to EJ Manuel and the second was the game. The Bills are reportedly going to start Thad Lewis next week after signing him off the practice squad. Next game: vs Cincinnati Bengals

22. San Diego Chargers (2-3) (16) – The Chargers got another great game from Phillip Rivers but the defense just seemed to fall flat. We were all waiting for Ryan Mathews to finally be healthy and now they he is, we’ve realized that he’s just not very good. I’m starting to feel bad for Rivers..which is totally unlike me. Next game: vs Indianapolis Colts (MNF)

19. Tennessee Titans (3-2) (15) – Whatever happened to this awesome offensive line that was supposed to help Chris Johnson run for over 2500 yards? The guy had 17 yards on 10 carries. You can trip and do better than that. Maybe without Jake Locker the box was stacked. Next game: @ Seattle Seahawks

18. Dallas Cowboys (2-3) (14) – I can’t blame the Cowboys for losing to the Broncos because the offense played its ass off. Tony Romo played his ass off and he deserves a lot of credit. Sure he should get some blame for blowing it at the end but lets not act like the defense didn’t give up 51 points. Next game: vs Washington Redskins (SNF)

17. Cincinnati Bengals (3-2) (23) – The Bengals defensive line really showed how dominant it can be against a good team. Had they lost this game, it really would’ve kicked the AFC North door wide open. That being said, its still up for grabs. Next game: @ Buffalo Bills

16. New York Jets (3-2) (22) – Geno Smith and the Jets looked pretty good. I can’t really take away from anything they did. They maintained their composure and won against a better-than-we-all-think Falcons team on the road. Next game: vs Pittsburgh Steelers

15. Cleveland Browns (3-2) (19) – I like whats happening in Cleveland. I love how the team is rallying together around a good defense. The “us against the world” mentality is a great tool to motivate underachieving teams. I hope the Brian Hoyer injury doesn’t send them spiraling…but it probably will because Brandon Weeden is not a good quarterback. Next game: vs Detroit Lions

14. Arizona Cardinals (3-2) (18) – The Cardinals defense really showed up. D-Wash was exactly what they needed and they put the offense in a good spot to win. Its unfortunate that they’re in such a tough division. If the Cardinals were still in the NFC East, they’d be two games up. Next game: @ San Francisco 49ers

13. Houston Texans (2-3) (11) – Matt Shaub is not a good quarterback. The Texans need a new quarterback and a new offensive coordinator. How do you have a talent like Arian Foster on your team and not maximize his abilities? I know he got 21 carries for 98 yards but it was a quiet 98 yards. Another disappointing team because that AFC South is winnable. Next game: vs St Louis Rams

12. Green Bay Packers (2-2) (13) – The Packers took advantage of the Lions best player being out and honed in on the Reggie Bush and Joique Bell. It’ll be interesting how they progress with Clay Matthews being out for a month. Next game: @ Baltimore Ravens

11. Indianapolis Colts (4-1) (12) – The Colts look like the real deal. Andrew Luck is a future MVP and he played extremely well against a very good defense. Next game: @ San Diego Chargers (MNF)

9. Detroit Lions (3-2) (7) – If this is what the Lions look like without Megatron, they’re in trouble. Kris Durham is not a good enough replacement. Next game: @ Cleveland Browns

8. Miami Dolphins – (3-2) (6) – Man 3-0 seems like a lifetime ago, doesn’t it? Ryan Tannehill and the offense definitely showed up but the Dolphins defense could seem to keep Ray Rice out of the end zone despite the 2.7 yards per carry. The Dolphins pass protection had some issues and luckily Tannehill is a mobile quarterback. Next game: Bye Week

7. Baltimore Ravens – 3-2) (10) – With the AFC North so wide open, this is a huge win. Joe Flacco is going to have to limit the turnovers. He’s thrown 6 interceptions in his last two games. Next game: vs Green Bay Packers

6. New England Patriots (4-1) (4) – The Patriots really miss Rob Gronkowski in the worst way. They couldn’t move the ball. They couldn’t get into the end zone from the one yard line in the fourth quarter and Brady was sacked four times. On the bright side, Danny Amendola came back and caught 4 passes for 55 yards. Next game: vs New Orleans Saints

5. Seattle Seahawks (4-1) (2) – The Seahawks suffer their first loss of the season against the upstart Colts. The defense couldn’t seem to stop TY Hilton and let Andrew Luck carve them up. I still think the Seahawks are the best team in the NFC but if they can’t win a game on the road, it won’t end well for them. I’m sure the Saints will give them some trouble. Next game: vs Tennessee Titans

4. San Francisco 49ers (3-2) (8) – Colin Kaepernick didn’t have a great game passing but the Niners were paced by the running game and the defense. It helps that Matt Shaub has become a terrible quarterback and opened up the game with a pick six…followed by two more interceptions. Maybe he’s got a bet with Joe Flacco to see who’s the worst quarterback in the league. The winner gets Mighty Wings. Next game: vs Arizona Cardinals

3. Kansas City Chiefs (5-0) (5) – The Chiefs are off to their best start in in decade. The defense harassed Ryan Fitzpatrick with three sacks and he threw two interceptions. Fitzpatrick also ended up being the Titans leading rusher on the day. The Chiefs didn’t get a great game from Alex Smith but Jamaal Charles played well enough to pace them. The Chiefs defense is clearly the best in the league. Next game: vs Oakland Raiders

1. Denver Broncos (5-0) (1) – Peyton Manning finally threw an interception so I guess he’s actually human. Unfortunately for the Cowboys he passed for four touchdowns and ran for another. Thats right. Peyton Manning ran for a touchdown for the first time in five years. In reality, it doesn’t really matter who they play next…except that its the Jacksonville Jaguars, prompting the largest point spread in NFL history at 28. Next game: vs Denver Broncos 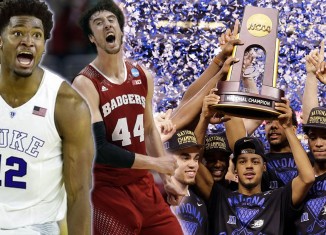 Apr 11, 2015
0
Join the KIRS Radio team from Noon to 2pm for unique and entertaining sports coverage you can't find anywhere else! The team will be discussing MLB Opening week and talk basketball with Martin Soares from BBall Society!

No Respect In The New Era?