2. Washington Redskins (from St. Louis Rams) – Robert Griffin III, QB, Baylor – Another safe bet even though the Skins gave up a king’s ransom for the rights to select him.

3. Minnesota Vikings – Matt Kalil, OT, USC – He’s the best lineman in the draft and the Vikings need someone to protect Christian Ponder. Charlie Johnson didn’t a very good job of that last season.

4. Cleveland Browns – Morris Claiborne, CB, LSU – The Browns have a definite need at quarterback but I think anyone else would be a reach at this point. The Browns could trade down and take someone but if they don’t, Claiborne is their man.

5. Tampa Bay Buccaneers – Trent Richardson, RB, Alabama – They made a great acquisition in Vincent Jackson and they have a need a runningback. Blount can’t catch, he can’t block and he’s a fumble waiting to happen. If Claiborne falls to the Bucs, they might have a tough decision to make.

6. St. Louis Rams – Justin Blackmon, WR, Oklahoma St – They went out and made a hell of a deal with Washington and the only other position they could go here is offensive line. I think Blackmon is going to up being a better prospect for them than anyone at tackle would be.

7. Jacksonville Jaguars – Riley Reiff, OL, Iowa – Iowa puts out good linemen and the Jaguars should take this guy. They could also go wide receiver but I think this is a more pressing issue because they have such a young quarterback and they need to keep him healthy.

8. Miami Dolphins – Michael Floyd, WR, Notre Dame – I still believe the Dolphins are the front runners for Matt Flynn. It makes all the sense in the world. The Dolphins already traded away Brandon Marshall so they’ll need a wideout other than Davone Bess.

9. Carolina Panthers – Dontari Poe, DT, Memphis – My gut says they’ll take an offensive lineman to protect Cam Newton but at the same time, I find it hard to believe that they’ll pass on a guy like Poe. He’s over 350lbs and ran an awesome 40 at the Combine. This could be their new Kris Jenkins.

10. Buffalo Bills – Quinton Coples, DE, North Carolina – They spent a lot of money on Mario Williams but I don’t think they’re done upgrading the defense. Chan Gailey is a defensive guy and I think he’ll be excited to be able to have two great pass rushers to unleash on the AFC East quarterbacks.

11. Kansas City Chiefs – David DeCastro, OL, Stanford – Their running game wasn’t great last season. Most of it has to do with Jamaal Charles going down for the season but some of the blame has to go with the offensive line. Jonathan Martin would also be a good pick here but I think the need at guard is greater than the need at tackle.

12. Seattle Seahawks – Melvin Ingram, DE, South Carolina – The Seahawks were one of the worst teams in terms of rushing the passer and they aren’t showing many signs of improvement. Ingram is the best player available at this point.

13. Arizona Cardinals – Jonathan Martin, OL, Stanford – Its hard to see a guy this good slip out of the top 10 but that’s the nature of the business. Peyton Manning already ruled out Arizona so this guy will be protecting Kevin Kolb.

14. Dallas Cowboys – Dre Kirkpatrick, CB, Alabama – The Cowboys should go offensive line but I think cornerback is a more pressing matter. Their secondary is atrocious to begin with and they just cut Terrence Newman. Mark Barron is also an option here.

15. Philadelphia Eagles – Luke Kuechly, LB, Boston College – If the Eagles don’t sign a linebacker in free agency, this is their man. If they do end up signing a Curtis Lofton or maybe a Dan Connor, they’ll probably go defensive line.

16. New York Jets – Courtney Upshaw, OLB/DE, Alabama – Jets fans are salivating over an Alabama player with dreads to be drafted here. Unfortunately, there’s no way Trent Richardson falls this far down so Upshaw will have to do. He didn’t have a great Combine but a lot of what makes him great can’t be measured in Indianapolis.

17. Cincinnati Bengals – Janoris Jenkings, CB, North Alabama – The Bengals are desperate for a defensive back and a runningback. With two picks in the first round, they have a chance to fill both needs.

18. San Diego Chargers – Nick Perry, DE/OLB, USC – The Chargers need a pass rusher and he’s the best available at this point in the draft.

19. Chicago Bears – Michael Brockers, DT, LSU – Before the Brandon Marshall trade, anyone could see the Bears taking a wide receiver here. Now that they’ve reunited Jay Cutler with the best receiver he’s ever played with, the Bears can focus on other positions of need.

20. Tennessee Titans – Cordy Glenn, OG, Georgia – A defensive end would be good here but based on Chris Johnson’s numbers from last season, I think an interior lineman makes more sense.

21. Cincinnati Bengals – Lamar Miller, RB, Miami(U) – With Cedric Benson on the free agent market, the Bengals should use their second pick in the first round to take Miller. He’s a dynamic runner who can block, catch out of the backfield and even return. But I might be a little biased.

22. Cleveland Browns – Stephen Hill, WR, Georgia Tech – Its hard to imagine Hill falling this far but he’s a steal right here. They could also go quarterback and take Ryan Tannehill but I’m not convinced they can’t get him in the second round.

23. Detroit Lions – Whitney Mercilus, DE, Illinois – The Lions are going to take the best player available. Could you imagine a pass rush with Ndamukong Suh, Nick Fairley and Mercilus on the same line?

24. Pittsburgh Steelers – Dont’a Hightower, LB, Alamaba – With James Farrior gone, Hightower can step right in and be a productive part of the always dominant Steelers defense.

25. Denver Broncos – Devon Still, DT, Penn St – I refuse to believe that John Elway is dumb enough to take a quarterback here. Even if they sign Manning, why not let Tim Tebow be the future? He’s a proven winner. They should focus on other positions of need.

26. Houston Texans – Kendall Wright, WR, Baylor – The Texans had a lot of injuries last season and even if everyone was healthy, they had a lack of depth at wide receiver. Wright is an absolute steal here.

27. New England Patriots – Jared Crick, DT, Nebraska When it comes to the draft, no one can ever guess what the Patriots are going to do. Their front seven isn’t good so I’d expect them to take a defensive lineman.

28. Green Bay Packers – Jerel Worthy, DT, Michigan St – Another option could be offensive line so don’t be surprised if they take a guy like Peter Konz from Wisconsin.

29. Baltimore Ravens – Peter Konz, C, Wisconsin – The Ravens always take the best available player and in this case, he’s not just that. He’s also a player of need. He can replace Ben Grubbs in the meantime and later on, replace Matt Birk.

30. San Francisco 49ers – Colby Fleener, TE, Stanford – This dude played right in their backyard so they know him very well. Harbaugh likes to play with multiple tight ends and they’ll need to add more weapons if they want to attract Peyton Manning and/or keep Alex Smith.

31. New England Patriots – Mark Barron, SS, Alabama – The Patriots had one of the worst pass defenses in the league and Barron might be one of the few safeties worth taking in the draft, especially at this point.

32. New York Giants – David Wilson, RB, Virginia Tech – The Giants’ strength has always been their running game and last season they were one of the worst rushing teams in the league. They’ll need to replace Brandon Jacobs. They could also go offensive line here and take Mike Adams from Ohio St. 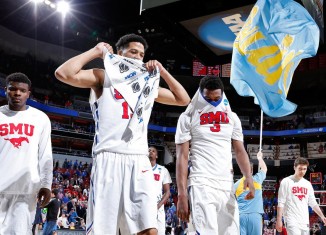 Mar 21, 2015
0
Join the KIRS Radio team from Noon to 1pm for unique and entertaining sports coverage you can't find anywhere else! The team will be discussing Kevin Durant's injury issues and the upsets in the NCAA Tournament.