As always, the next coming weeks are very exciting for football fans. Its like the weeks leading up to Christmas. The temperature is changing, there’s a feeling in the air…a sense of joy for football fans everywhere. No matter what your team did this past season, everyone gets a clean slate. Its a new beginning.

1. Carolina Panthers – Cam Newton, QB, Auburn – The Panthers are very likely leaning towards taking a quarterback and according to reports from the Carolina camp, Cam Newton has something that Jimmy Clausen lacks.

2. Denver Broncos – Marcell Dareus, DT, Alabama – The Broncos were last in sacks last season and even with the return of Elvis Dumervil next season, they’ll still need a strong presence up front.

3. Buffalo Bills – Blaine Gabbert, QB, Missouri – The Bills need a quarterback, plain and simple. They may not take him but they need him. One thing to note: if Cam Newton is available here, they will take him. And if they don’t, the city of Buffalo will spontaneously combust.

4. Cincinnati Bengals – AJ Green, WR, Georgia – This Bengals team is in disarray. There are a lot of question marks offensively and players will have to be replaced. Green will be one of the first pieces in the rebuilding process.

6. Cleveland Browns – Von Miller, LB, Texas A&M – The general consensus is that Miller won’t be available here but I think he will if the Bills draft smart. (Not to say that drafting Miller wouldn’t be smart.) He’d be the best player available for anyone at this point in the draft.

7. San Francisco 49ers – Robert Quinn, DE, UNC – Quinn will be the best player available here as well and the 49ers do need help along the defensive line. Don’t be surprised if they try to trade up for Blaine Gabbert here.

8. Tennessee Titans – Nick Fairley, DT, Auburn – The Titans have missed the inside presence they lost when Albert Haynesworth left for Washington. It should be worth mentioning that the Titans new defensive line coach, Tracy Rocker coached Fairley at Auburn.

9. Dallas Cowboys – Tyron Smith, OT, USC – Its no secret that the Cowboys’ offensive line needs help after the way Tony Romo suffered his injury last season. Marc Colombo’s best days are behind him and Smith will likely be a replacement.

10. Washington Redskins – Julio Jones, WR, Alabama – The Redskins may want to trade up because one of their biggest needs is along the defensive line. If not, Julio Jones is the logical choice. Santana Moss is a free agent and may not return which would make the Redskins top receiver Anthony Armstrong.

11. Houston Texans – JJ Watt, DE, Wisconsin – The Texans were one of the worst pass rushing teams in the NFL last season. The Redskins could also grab Watt at 10 because he fills a need for them too.

12. Minnesota Vikings – Prince Amakamura, CB, Nebraska – There are experts who believe the Vikings should and will take Jake Locker out of Washington. While I don’t think that taking a quarterback is a bad idea for them, I don’t think the answer is Locker. He’s very athletic but he makes terrible decisions and in my opinion, he’s not a top 20 pick. Prince fills a need for them at cornerback and he was one of the best in the nation.

13. Detroit Lions – Aldon Smith, DE, Missouri – Smith is the best player available despite coming off of an injury this past season. Best case scenario for the Lions is that they either trade up or hope that Amakamura falls to them. Either way, they’re getting a solid player here.

14. St. Louis Rams – Corey Liuget, DT, Illinois – The Rams need a another strong interior lineman to play next to Fred Robbins but don’t be surprised if Da’Quan Bowers is the selection here because they could also use a pass rusher from the defensive end position.

15. Miami Dolphins – Mike Pouncey, G, Florida – The general consensus is that the Dolphins will trade down to acquire more picks since they don’t have a selection in the second round. That being said, they have several holes to fill. Cameron Jordan and Ryan Kerrigan could also go here because the Dolphins have been looking to improve their defensive line.

16. Jacksonville Jaguars – Ryan Kerrigan, DE, Purdue – This kid Kerrigan is something else. He’s not the most talented but he works really hard and has an unbelievable motor. He’ll learn a lot from Aaron Kampman.

17. New England Patriots – Cameron Jordan, DE, California – Speaking of guys with motors, Jordan is one of those guys that plays through the whistle. During Senior Bowl practices, Marvin Lewis almost kicked him out for hitting the quarterback. The Patriots showed this past season that they need a more solid pass rush. In their playoff loss to the Jets, they had no pass rush whatsoever.

18. San Diego Chargers – Cameron Heyward, DE, Ohio State – I don’t see AJ Smith trading up to take a guy like JJ Watt, who is very high on their big board. If there’s any doubt about Heyward’s athleticism, just take a look at what he did this past season against my Miami Hurricanes.

19. New York Giants – Anthony Constanzo, OT, Boston College – William Beatty and Kevin Boothe have struggled in their development. Constanzo and coach Tom Coughlin both have Boston College ties and that could appeal to the Giants.

20. Tampa Bay Buccaneers – Justin Houston, DE, Georgia – The Bucs are almost guaranteed to take a defensive end here because of their serious need at the position. The question is will they trade up to take a guy like Robert Quinn or do they stay where they are and take the best available player. My money’s on the latter.

22. Indianapolis Colts – Derek Sherrod, OT, Mississippi State – The Colts need a replacement for Charlie Johnson at left tackle. He’s a free agent and he isn’t really all that great anyway.

23. Philadelphia Eagles – Jimmy Smith, CB, Colorado – The word around the NFL is that the Eagles are looking to draft a cornerback and may trade up to take Prince Amakamura. They have extra picks later on in the draft so they could try to move up to get their guy.

24. New Orleans Saints – Da’Quan Bowers, DE, Clemson – Bowers had a really bad pro day because before then, he was projected to go in the top 15. I think he’s still a quality player and he’s extremely valuable this late in the first round.

25. Seattle Seahawks – Marvin Austin, DT, UNC – Despite his off the field issues, Austin is a great player and at one point he was projected as a top five selection. Seattle is getting a great player here if they take him.

26. Baltimore Ravens – Muhammad Wilkerson, DE/DT, Temple – Wilkerson can play inside and outside and fits well into Baltimore’s defensive schemes. The Ravens aren’t known for trading up or down on draft day but they would like to take Cameron Heyward.

27. Atlanta Falcons – Kyle Rudolph, TE, Notre Dame – With Tony Gonzalez entering his 16th season, he won’t be around much longer. Not to mention the fact that he had his worst season since his rookie year in 1997. The Falcons have to start thinking about a replacement.

28. New England Patriots – Nate Solder, OT, Colorado – Once again, the Patriots could trade out of this pick but if they don’t they could look to improve their offensive line in case Matt Light doesn’t re-sign. Another option for them here could be Mark Ingram from Alabama, the 2009 Heisman Trophy Winner.

30. New York Jets – Akeem Ayers, DE, UCLA – The Jets have completely given up on the Vernon Gholston experiment…or at least Jets fans everywhere hope so. Fortunately, Ayers is a little more polished and NFL-ready than Gholston was.

31. Pittsburgh Steelers – Brandon Harris, CB, Miami – The Steelers would prefer to go with Aaron Williams because of his versatility but he may not be available. I don’t foresee them trading up to take him so they may settle with Harris here. Besides…you can’t go wrong with a Hurricane. 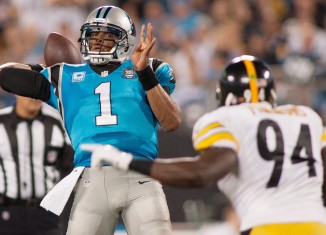 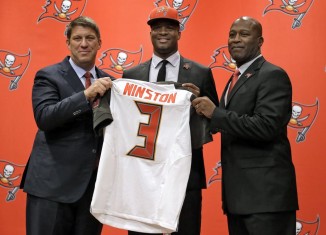 May 7, 2015
0
The guys recap the draft, talk about their favorite picks and Stan settles his bet with Rob.