The professional sports world has become a multi-billion dollar industry always evolving in different ways and forms. The addition of athlete’s branding themselves and controlling the economical fates of cities and businesses is now a common practice. It’s also common to see most professional sports leagues dominated by testosterone filled battle royal which catered to men. This has remained constant throughout the years, but over time many women have revolutionized the image of professional sports. Pro athletes such as Venus and Serena Williams and pro golfer Annika Sorenstam stand as beacons of hope for other women to ascend into a majority male dominated arena. These women match their talented play in the game with a steady game face in business and marketing.

Gender is a huge factor when it come to men and women sports leagues. An economic breakdown of the differences between the WNBA, which was created 15 years ago, and NBA is staggering. The highest paid player in the NBA coming into this season is making 24,806,250 for the year, while the top earner for the WNBA is only taking in $101,000. From the time its creation until now, the women’s pro basketball continues to degenerate. The first season of the league was very successful due to the hype that surrounded the USA Women’s basketball at the 1996 Olympics. The years after that have seen attendance dwindle and teams contracted due to lack of revenue and city support. The league has just recently allowed advertisements on the players jerseys just to stay afloat financially during these hard economic times. Critics of the WNBA say that the league lacks excitement such as dunks,fancy dribbling and high scoring. Others speculate that the league isn’t populare in the US because it takes place during the summer along with the Major League Baseball season.

Many of the WNBA players play overseas during the off season for more pay and many have said that the crowds there are more appreciative of the game. Some WNBA players make more money off the court through endorsements. Lisa Leslie for years held the right to say she was the first to dunk in a WNBA game and has appeared in several commercials and made guest appearances in TV shows and movies. Candice Parker is one of the current stars of the league and earns more money than any female player in WNBA history. Her current endorsements with Adidas and Gatorade are estimated to be worth approximately $3 million. Parker was drafted to the league in 2008, a year after making headlines for winning a televised slam dunk contest against male players.

Indy Car and NASCAR racing traditionally was a “boys only” game with little female viewership or participation. That all changed in 2005 when Danica Patrick drove her way into becoming a full time professional race car driver. Though Patrick’s appearance at races angered many traditional fans, it also brought in new fans including women who were inspired by her drive and guys who were curious to see if she could actually race.

Patrick also demonstrated smart and savvy business and marketing skills as she aligned herself with multiple sponsors and endorsements that helped her standout from the rest of the racing pack. Her car is endorsed by Go Daddy.com, an online web company which Patrick serves as the spokesperson and has appeared in plenty of Super Bowl commercials. Can anybody truly remember Go Daddy before Danica became the spokesperson? In addition, Patrick has taken her brand outside the sport’s arena as guest host on several shows and made appearances in several magazines.

The role of women in sports and the way females are perceived has forever been changed. Women started off as solidly cheerleaders at sports games, but today they are all star players with hugh endorsement deals. Women like Danica Patrick and Candice Parker continue to prove why women should get the same economical support and respect of the men in sports outside of Tennis and Gymnastics. However, the question still remains, is the world ready for gender prejudices to take a backseat and let true talent be appreciated and appropriately compensated?

This article is featured in NV Magazine 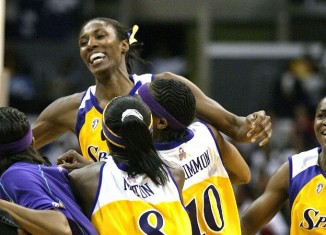 Jul 30, 2014
0
On this day 12 years ago Lisa Leslie became the first WNBA player to dunk in a game. Check out the historic video below... 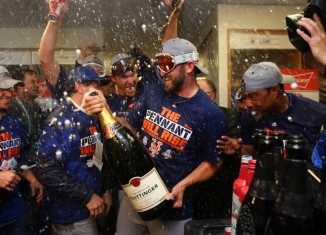 Oct 24, 2015
0
Join the KIRS Radio team from Noon to 2pm for unique and entertaining sports coverage you can't find anywhere else! The team will be breaking down week 6 of the NFL season and the current ALCS/NLCS match ups in baseball.