Over the past several seasons, there’s been a noticeable shift in the way running backs are used in the NFL. What we’ve seen is less emphasis on one feature back and teams are using two and sometimes three running backs. While I believe that this year’s class is deep, there are no stud running backs.

Mark Ingram at this point last year was the best running back in the nation coming off a Heisman win and a national championship. Injuries in the off-season didn’t help his cause and he had an unimpressive year. One thing to consider is that despite having a down year from the 1,600 yards he put up in 2009-10, is that he split carries with Trent Richardson, which resulted in nearly half as many carries this past season. Had he topped 200 carries, he would have rushed for close 1,200 yards.

Illinois’ Mikel LeShoure is an interesting prospect. He’s a solid back. He’s got great speed for a guy his size and he’s a hard guy to take down, following in the footsteps of another former Fighting Illini, Rashard Mendenhall. For the past two seasons, LeShoure has averaged over 6 yards per carry. The game that really stands out to me is his performance against Northwestern. 33 carries, 330 yards, 2 touchdowns. A performance like that is unreal, no matter who the opponent is. If his combine is good, he may be the best back available this year.

One of the biggest surprises of the season was UConn and Jordan Todman. He followed up a good 2009 with a great 2010 and helped lead his Huskies to the Fiesta Bowl against Oklahoma where he tried to put the team on his back rushing for over 130 yards.

Oklahoma‘s DeMarco Murray has a good opportunity to set himself apart from the pack. He had a good bounce back season after a so-so 2009-10, and he’ll go on to the Senior Bowl and a strong performance will help him raise his stock.

I’ll be completely honest with you. When Jacquizz Rodgers bursted onto the scene a few years ago and had a big game in an upset over USC, I didn’t think he’d be that great but he’s proven me wrong. Rodgers is a small shifty runner that reminds me a lot of Darren Sproles. He continues to prove that he can be a feature back and there’s no reason he can’t find a way to contribute in the NFL.

Last season, when Jahvid Best suffered his neck injury after the first few games of the season, Shane Vereen took over and like Best, has great acceleration and vision. He’s a little bigger than Best was and even has a bit of power like another former Cal Golden Bear, Marshawn Lynch.

About five or six years ago, I stumbled across a Youtube video. It was a highlight package of a young high school running back from Miami, Florida and I was blown away. At that point, I wanted nothing more than for this kid to be a Hurricane. Well, when he announced that he was going to play for the West Virginia Mountaineers, I was heartbroken. The things I saw from the young man from North Fort Myers High School wouldn’t end up in Coral Gables. After playing behind Steve Slaton his freshman year, Noel Devine went on to have two outstanding seasons. This past season he had a drop in production (I blame the coaching change) but Devine is still as quick as he’s ever been. The only knock on him is his size as he was recently measured at 5’7″ 160lbs at the Senior Bowl.

Another running back that hurt me was Wisconsin‘s John Clay in the 2009 Champs Sports Bowl against Miami. This past season he started off at the same pace but trailed off after the Purdue game. He missed two games and only netted 150 yards and a touchdown in the final 5 games of the season (including the two missed games). Even with the reduced production down the stretch, he put together a decent season in Madison.

Here are a few other running backs to keep an eye out for:

Questions or comments? Hit me up at s_talouis@yahoo.com 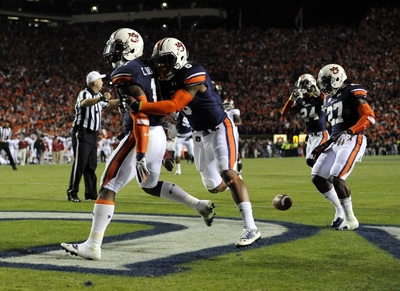