In sports we have seen athletes grow stronger and faster with each passing year adjusting to the expansion of talent and expectations. The only thing that seems to have been left stagnant is the maturity and respect for teammates,family and the game.

The recent incident involving Dallas Cowboys rookie wide receiver Dez Bryant and teammate Roy Williams goes well beyond the levels of an isolated team problem. It is yet another example of the growing lack of respect and appreciation for the game’s tradition that has lasted well over 90 years. Bryant is a very talented rookie but is still only that and should show respect to a veteran at his position regardless of the impending competition. Williams is coming off a bad season but has been productive in the past to earn him more respect than the public has shown and the refusal of Bryant to carry his shoulder pads just added more dirt to his already tarnished image.

Bryant shouldn’t be surprised by this small bit of hazing since every athlete has had to have played sports at every level since they were toddlers. Team hazing has been around forever and strangely enough it brings a team closer together so for Bryant to feel bigger than that is almost like saying he is better than the team in my opinion. I can only expect for when contact scrimmages start that Bryant gets plenty of unwanted attention from the Cowboy’s veteran secondary.

The situation regarding Lebron James going to Miami has also been a hot topic among sports purists. If James wants to be a champion so bad then win it the way you were billed as the so called “savior” of a franchise who literally made us all witnesses of his failure on July 7th 2010. “The Decision” as it is labeled was ironically made in front of kids from the Boys & Girls Club giving him the appropriate audience to expose the false leadership he once proudly portrayed in the league.

The recent comments from Michael Jordan and Magic Johnson have further proved the lack of respect James has shown the league and it’s fans. Back in the day you would never have a superstar like Magic want to team with rival and good friend Larry Bird because of the understanding of how much they meant to their respective cities and the growth of the league. The rivalry between Magic & Bird was a definite catalyst in the growth of the NBA and in helping shape the bright future for more great rivalries for fans to look forward to each season. If these guys really want to play together so bad then save it for the USA Basketball team and continue winning us gold at the Olympics and World Basketball Championships.

I know there are gonna be many different opinions on respect and the importance of tradition but one fact still remains we need the athletes to remember the love for sports. I mean isn’t that what it’s all about anyway? 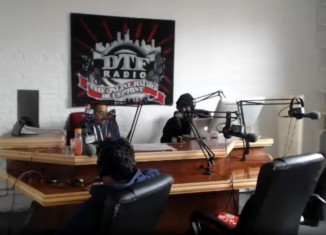 Dec 29, 2014
0
Check out the full replay of the latest episode of the KIRS Radio Show on DTF Radio/Ripped Radio Network. This episode featured discussions on the week 17 NFL match ups and a recap of the NBA's Christmas Day marathon.Enjoy episode #64 from Brooklyn, NY!

KIRS Poll: Where Will D-Wade & Lebron Play Next Season?