With 15 days remaining before the NFL draft, there have been some moves in the NFL lately that I feel could have an impact on this year’s draft. For some reason, Tim Tebow‘s draft stock has risen exponentially. I’ve been saying it all along. He may not be a top 10 or even a top 20 pick, but any team that drafts him is getting a valuable player, both on and off the field. This kid is no joke, he works harder than anyone I’ve ever seen.

Other than Tebow, it seems like the Cowboys are gearing up for a big year… buy cutting dead weight. They’ve already released Ken Hamlin and Flozell “The Hotel” Adams and rumor has it there was interest in a trade for Marion Barber but the Cowboys have since disputed those rumors. Also, the Eagles traded Shelden Brown to the Browns for draft picks. The Eagles now have 10 picks in this draft that they can use if they either want to replace Shelden Brown. The biggest story so far in the offseason has obviously been Donovan McNabb being traded to the Redskins. I don’t think this trade has any major effects outside of where Jimmy Clausen gets selected. If for whatever reason, Buffalo passes on him at number 10, he might not get selected until Minnesota is on the clock at number 30.

1. St. Louis Rams – Sam Bradford, QB, Oklahoma – Bradford had a very good pro day and looks to be every bit of the same player he was before his shoulder injury.

2. Detroit (2-14)- Russell Okung, OT, Oklahoma St– If the acquisitions they made are any indication, Okung should go to Detroit. He’s the best offensive tackle in the draft.

3. Tampa Bay (3-13)- Ndamukung Suh, DT, Nebraska – I still don’t see how the Bucs can take McCoy over Suh because he fits the Tampa 2 scheme. It wouldn’t be a bad idea to trade down, get some picks for later in the draft and take McCoy if he’s such a better fit.

4. Washington (4-12) – Trent Williams, OT, Oklahoma – Like I said in the last mock, the Bills have to replace Chris Samuels. People seem to forget that Jason Campbell has a new offensive coordinator almost every year since he was at Auburn. He could benefit from some consistency and real coaching.

5. Kansas City (4-12)- Bryan Bulaga, OT, Iowa – I don’t think Matt Cassel is that good. He was a product of a good Patriots system. That said, they still need to protect him and any other quarterback they bring in.

6. Seattle (5-11) – Anthony Davis, OT, Rutgers – Even though they have options here, Walter Jones can’t play forever. Either way, the Seahawks are losing someone. If they take Davis, they miss out on Berry. Even with two first rounders, they can’t address all their needs but they can make themselves a lot better.

7. Cleveland (5-11) – Eric Berry, S, Tennessee – I still like Joe Haden as a pick here but the Browns traded for Sheldon Brown, a very serviceable cornerback, so now they can focus on other parts of their defensive backfield.

8. Oakland (5-11) – Gerald McCoy, DT, Oklahoma – At this point in the draft, McCoy is going to be the best defensive player available and the Raiders shouldn’t pass him up.

9. Buffalo (6-10) – Jimmy Clausen, QB, Notre Dame – There were reports about Clausen‘s leadership skills and other intangibles, but I think he’ll be fine. Anytime you can take a potential franchise quarterback you have to take advantage.

10. Jacksonville (7-9) – Derrick Morgan, DE, Georgia Tech – The so-called “experts” will tell you that Jacksonville is in need of an edge rusher from the outside but then turn around and they they might take someone like Rolando McClain from Alabama, an inside linebacker. I think its a no-brainer, but don’t be surprised if the Jags give Sergio Kindle a really serious look.

11. Denver – from Chicago (7-9) – Dez Bryant, WR, Oklahoma St – Once again, reports came out about this kid’s dedication to the game when he supposedly showed up to his pro day without cleats, which I don’t believe. Only around draft time could something like this come up. I’m glad he addressed it.

12. Miami (7-9) – Sergio Kindle, OLB, Texas – People forget easily that Bill Parcells always seems to strike gold with outside linebackers. He did with the Giants (Lawrence Taylor) and with the Cowboys (DeMarcus Ware) so Kindle is a likely choice here.

13. San Francisco (8-8) – Joe Haden, CB, Florida – The Niners need to add some depth in the secondary and Haden silenced a few of the doubters by running a better 40 yard dash during his pro day.

14. Seattle – from Denver (8-8) – CJ Spiller, RB, Clemson – There is no reason this kid should fall out of the top 15 and I’ve been debating this for quite some time. He’s a playmaker and will help the Seahawks.

15. New York Giants (8-8) – Rolando McClain, LB, Alabama – A guy like Sean Weatherspoon from Missouri could leapfrog McClain here but there’s a good chance McClain may not even be available when the Giants are on the clock so Weatherspoon would be a solid pick here as well.

16. Tennessee (8-8) – Brandon Graham, DE, Michigan – Graham is going to benefit from Jacksonville taking Derrick Morgan… unless they don’t take him, which would allow Morgan to slip to the Titans right here.

17. San Francisco – from Carolina (8-8)- Bruce Campbell, OT, Maryland – I would love for Taylor Mays to land here but I think the 49ers are thinking about bolstering their offensive line with one of their two first round picks. There are also some rumors of San Fran trading one of these picks to the Philadelphia Eagles for McNabb and the 24th pick.

18. Pittsburgh (9-7) – Kyle Wilson, CB, Boise St – I like Earl Thomas but he’s more safety than corner and the Steelers are thin at corner.

19. Atlanta (9-7) – Jason Pierre-Paul, DE, South Florida – This guy is a hybrid player and will get after the quarterback. He’s a bit of an unsung hero because he played with George Selvie who got the majority of the attention.

20. Houston (9-7) – Ryan Matthews, RB, Fresno St– Matthews is a bigger back than Steve Slaton is and can be just as explosive.

21. Cincinnati (10-6) – Demaryius Thomas, WR, Georgia Tech – I still like this pick for the Bengals. It helps them close the gap between themselves and the Ravens, who made a huge acquisition in Anquan Boldin.

22. New England (10-6)- Jared Odrick, DT, Penn State – This guy can play inside and outside, he’s a tough kid and Belichick likes versatility. Plus, losing Richard Seymour and having their defensive line exposed doesn’t help either.

23. Green Bay (11-5) – Charles Brown, OT, USC – Everyone’s an expect after seeing the first five minutes of “The Blind Side” and its become the general rule of thumb that offensive tackle is one of the most important positions on the field.

24. Philadelphia (11-5) – Earl Thomas, CB, Texas – Could they package a few of their picks to take another “franchise” quarterback? I don’t think so. The Eagles (as much as I hate them) are a very smart organization. They wouldn’t trade an All-Pro quarterback unless they were completely behind Kevin Kolb as their starter.

25. Baltimore (9-7) – Jermaine Gresham, TE, Oklahoma – Its amazing to me that the Ravens were able to pull off a trade for one of the league’s best receivers and still keep their first round pick. If this guy is available here, it would fill an obvious need.

27. Dallas (11-5) – Taylor Mays, S, USC– Like I said in the last mock, as good as the Cowboys defense was last year, its one weakness was in the secondary. Guys like Taylor Mays (big hitters) are a dying breed because the league is trying to focus on protecting players. But after cutting Ken Hamlin, this is an obvious choice.

29. New York Jets (9-7) – Golden Tate, WR, Notre Dame – I could see Rex Ryan getting a new toy for that defense but they had a top 10 defense and didn’t lose anyone. They can take Tate, who can make an immediate impact, and address whatever defensive needs in the later rounds.

30. Minnesota (12-4) Devin McCourty, CB, Rutgers – McCourty is a better than average cornerback and the Vikes had a lot of injuries in their secondary last year.

31. Indianapolis (14-2) – Carlos Dunlap, DE, Florida –Dwight Freeney wasn’t much of a factor in the Super Bowl. Drew Brees wasn’t pressured much and it showed by the way he picked apart that defense. Dunlap at one point was considered to be one of the best defensive ends in the draft. Its hard to see him slip out of the first round.

32. New Orleans (13-3) – Everson Griffen, DE, USC – The Saints need a pass rusher. They could also go with Dan Williams from Tennessee or Terrence Cody from Alabama.

Just a few notes from around the league- Jimmy Clausen had a pre-draft workout for 16 teams where he completed 57 of 59 passes. I’d say that’s pretty impressive.

The Rams released Marc Bulger. I think he’s a decent quarterback. I’d like to see the Browns give him a shot. A new city, new personnel, new coach… who knows? I personally wouldn’t go there because that team is cursed. Mangini cursed them. Its official.

Questions or comments? Feel free to email me at s_talouis@yahoo.com 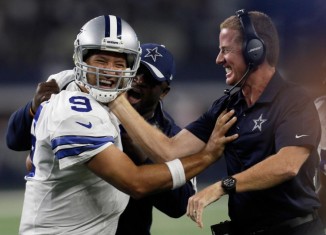 Sep 16, 2015
0
I couldn’t wait for football season and I couldn’t wait to get into these rankings. This year is going to be a little different from last year in that there won’t be two columns. Don’t worry, though. I’m sure Rob has plenty to say about how wrong I’ll be over the next few months.