Its that time of year again. New York hoops is going nowhere- college or pro. Baseball season hasn’t started yet, and as a Mets fan, baseball season isn’t coming until April… 2011. Luckily, the football offseason is well under way and I haven’t jumped off a bridge yet. So here’s my first mock draft of what I hope is at least five mock drafts. I honestly feel like my mock drafts are on par with those of Pat Kirwan and and Vic Carucci of NFL.com. The difference between them and myself? Inside information. So, without further delay, here we go.

1. St. Louis (1-15)- Sam Bradford, QB, Oklahoma – There are a lot of people out there that think the Rams would benefit from taking Ndamukung Suh, who is clearly the best defensive prospect in the draft. The Rams are moving on from Marc Bulger and need a successor. Besides, Adam Carriker was moved to defensive tackle and I don’t think taking Suh would be good for his psyche. I also think that Jimmy Clausen is a better pick here but Bradford gets the edge because of the numbers he put up and the success he had in college.

2. Detroit (2-14)- Ndamukong Suh, DT, Nebraska- As bad as the Lions were offensively, they were even worse defensively. The Lions gave up more points, yards, and passing yards than anyone else in the NFL and they were 25th in the league in rushing yards allowed. With that said, they’d be crazy to pass up on the best defensive prospect in the draft. Suh is going to make an impact right away and should help all three levels of defense.

3. Tampa Bay (3-13)- Gerald McCoy, DT, Oklahoma – I think Tampa Bay would like to move up to take Suh because he draws a lot of comparisons to a former Buccaneer that they drafted out of Miami. If Suh is number 1 in terms of defensive linemen, then McCoy is 1a.

4. Washington (4-12) – Russell Okung, OT, Oklahoma St – The Skins could also take Jimmy Clausen but I disagree with that. I think Mike Shanahan should work with Jason Campbell rather than come in and clean house. Plus I think with the retirement of Chris Samuels, they’ll need a left tackle to protect the quarterback and they’ll have to choose. Do they want the guy that makes the plays or the guy that protects the guy that makes plays?

5. Kansas City (4-12)- Bryan Bulaga, OT, Iowa – Scott Pioli is a smart general manager and he knows how to build a team. I think this would be a little high to take Bulaga but he’s a solid offensive lineman and the second best in the draft.

6. Seattle (5-11) – Jimmy Clausen, QB, Notre Dame – Hasselbeck’s time is running down in Seattle and Clausen could be the quarterback of the future. Pete Carroll needs to put his mark on the team right away and Clausen could be his ticket to NFL redemption in his second tour of duty.

8. Oakland (5-11) – Bruce Campbell, OT, Maryland – The real question here is which workout warrior is Al Davis going to take this year. Let’s rewind a little. Darius Heyward-Bey ran a great 40 yard dash last year. His 2009-10 stats? 9 catches, 142 yards, 1 td. Michael Crabtree, who was a better prospect finished with 48 catches, 625 yards, and 2 tds… and he missed the first 7 weeks of the season. Imagine if he had come into camp on time and played a full season. The moral of the story? It doesnt matter what happens at the combine. Anthony Davis is a better player, but Bruce Campbell had a hell of a workout. He could still be a good player but it’ll be based on what he did in Indianapolis.

9. Buffalo (6-10) – Trent Williams, OT, Oklahoma – The Bills GM Buddy Nix was asked about the team’s quarterbacks and this is what he said: “If they’re good enough, they’ll have a chance to be here … It’s hard to throw when you’re lying on your back.” That would indicate they’re looking to take someone to protect whoever is throwing the ball. I personally think they’d be better off taking a wide receiver and at this point in the draft, Dez Bryant is going to be the best player available, hands down. But I guess Bryant is useless if no one can throw to him.

10. Jacksonville (7-9) – Dez Bryant, WR, Oklahoma St – There is no reason Dez Bryant should fall this far, but if he does, Jacksonsille has to take him. Mike Sims-Walker is their best receiver and they have no depth. Another option here could be Joe Haden.

11. Denver – from Chicago (7-9) – Joe Haden, CB, Florida – Denver had a pretty good first half to their season last year before it all fell apart. Most of their success came from the defense and I think Joe Haden would be a good addition to the secondary. Offensively, I’d consider adding a wideout if I were them.

12. Miami (7-9) – Carlos Dunlap, DE, Florida – If you had asked me who the Dolphins would have taken at this point back in January, I would have told you either this guy Dunlap or Brandon Spikes. Spikes didn’t impress anyone at the combine and Dunlap has a lot of talent to pass up on. Parcells might be wary because of his off the field issues.

13. San Francisco (8-8) – Earl Thomas, CB/S, Texas- The Niners need to add some depth in the secondary and Thomas is a really versatile guy back there.

14. Seattle – from Denver (8-8) – Anthony Davis, OT, Rutgers – So now that the Seahawks have their guy under center, who’s protecting him? Anthony Davis is 20 years old, he’s quick, he’s strong and he’ll fit in well with Pete Carroll.

16. Tennessee (8-8) – Jason Pierre-Paul, DE, South Florida – Conventional wisdom will tell you that Pierre-Paul won’t fall this far, and a little part of me favors Georgia Tech’s Derrick Morgan over Pierre-Paul but the same argument I made about Suh and McCoy can be made. If Pierre-Paul is 1, then Morgan is 1a.

17. San Francisco – from Carolina (8-8)- Taylor Mays, S, USC- Mays makes too much sense here. Mike Singletary is a defensive guy, Mays is a monster at safety and he’s a local guy having played at Southern Cal.

18. Pittsburgh (9-7) – Mike Iupati, OG, Idaho – The Steelers’s offensive line hasn’t been the same since they let Alan Faneca go to the Jets, and they’ve just been getting better and better. They could use an upgrade on the interior line.

19. Atlanta (9-7) – Derrick Morgan, DE, Georgia Tech – Aside from being a hometown guy, Morgan could be brought in as a guy who can rotate with Abraham and Anderson on the defensive line. Another option for them is Brian Price from UCLA. They do need help in the secondary, but there’s some depth there and they could grab someone in the second round.

20. Houston (9-7) – Kyle Wilson, CB, Boise St- The Texans didn’t have much depth at cornerback to begin with and they just traded away Dunta Robinson. Needless to say, a cornerback is a need for them.

21. Cincinnati (10-6) – Golden Tate, WR, Notre Dame – The Bengals have to keep with the Ravens after their acquisition of Anquan Boldin. Pairing Tate with Ochocinco gives the Bengals a threat they lost when Chris Henry passed away.

22. New England (10-6)- Jermaine Gresham, TE, Oklahoma – The Patriots don’t just have a gaping hole at tight end, they have a bottomless pit. And what’s worse? They let Ben Watson sign somewhere else. Gresham isn’t particular great as a blocker but he’s faster than a lot of linebackers and bigger than most cornerbacks. He can give the Pats a new dimension they’ve never really had.

23. Green Bay (11-5) – Charles Brown, OT, USC – Brown is more of a later first round/early second round pick to me but its a solid pick here. Rodgers put up decent numbers and led the Packers to the postseason while playing most of the season on his back. Chad Clifton isn’t very good anymore.

24. Philadelphia (11-5) – Sergio Kindle, OLB/DE, Texas– Kindle reminds me of Brian Orakpo. They’re not talking about Kindle’s motor as much as they were talking about Orakpo’s but he’s more of a hybrid defensive player and he could end up being a replacement for Victor Abiamiri.

25. Baltimore (9-7) – Kareem Jackson, CB, Alabama – Its amazing to me that the Ravens were able to pull off a trade for one of the league’s best receivers and still keep their first round pick. As crazy as it might sound, the Ravens should bolster their defense a little, specifically in the secondary.

26. Arizona (10-6)- Sean Weatherspoon, LB, Missouri – Weatherspoon is a great linebacker. He racks up tackles and he’ll be an adequate replacement for Karlos Dansby.

27. Dallas (11-5) – Devin McCourty, CB, Rutgers- As good as the Cowboys defense was last year, its one weakness was in the secondary. Newman did a better than average job, and they’re still waiting for Mike Jenkins to come into his own, but there isn’t too much depth after Orlando Scandrick.

28. San Diego (13-3)- CJ Spiller, RB, Clemson – Its hard to imagine the first running back being taken this late in the first round but I don’t think this crop of running backs is as impressive as usual but its still a deep class.

29. New York Jets (9-7) – Brian Graham, DE, Michigan – Graham was one of the few bright spots on a less than stellar Michigan team. He works hard and Rex Ryan is getting a valuable player than can replace Marques Douglas.

30. Minnesota (12-4) Brian Price, DT, UCLA – Pat Williams can’t play forever and Brian Price is really underrated. He’s got skills and in the meantime, he can learn from watching Pat and Kevin Williams do some damage.

31. Indianapolis (14-2) – Maurkice Pouncey, C, Florida – While we’re on the topic of taking players that will benefit from watching, Mike Pouncey is good enough to play right now, but Jeff Saturday isn’t done yet. I also think it would be great idea for them to draft his twin brother Mike. Keeping this tandem together would be a coup.

Thats my first mock draft. There are a few question marks for me. I’m still waiting to see how the pro days go to see how things shake out. There are a few guys, namely Brandon Spikes, who hurt themselves by not running at the combine but I’m hoping some of these guys come to their senses and do everything at their pro days. I’d like to see more from Sam Bradford so that more people can see the difference between him and Clausen. Any questions or comments? Email me at s_talouis@yahoo.com. 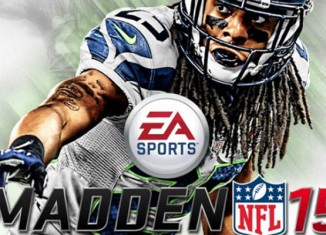 Jun 22, 2014
0
EA Sports has finally released the cover of Madden NFL 15 featuring Richard Sherman and once again the star Seattle Seahwaks defensive back is in the spotlight.